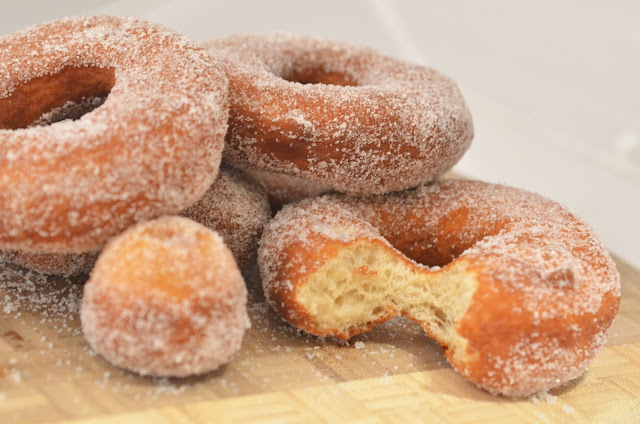 As you know, I was not satisfied with my first attempt at donuts.  My supportive friends dutifully ate them and reassured me they were good- but in truth they were dense and not entirely cooked in the middle… To prepare for my second round, I did some research and found several recipes with much more yeast than the first one I tried.  I ultimately settled on one entitled “The Perfect Beginner’s Yeast Donuts” from the Food Network.  It sounded promising.  The result was PERFECT.  They were light and fluffy and delicious!
They were also surprisingly easy.  I made the dough about six hours in advance and then fried them up after dinner.  The frying process doesn’t take long- but it helps to have someone in charge of coating the warm donuts in sugar (thank you Jamie).  If you let them cool for too long, the sugar will not adhere properly.  The donuts can be kept in an airtight container for a day or two, but they are really best when served right out of the oil. 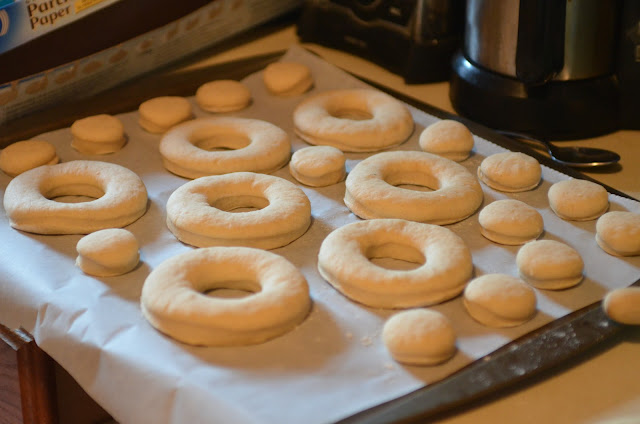 Canola, peanut, or vegetable oil, for frying (enough to fill your pot with about 3 inches of oil)
Heat up the 1 1/2 cups of milk in a small sauce pan over medium-high heat until steaming and very hot, about 3-5 minutes. Whisk in the shortening, whisking until fully melted. Set aside until the milk has cooled to room temperature.

Heat up your water to 105 to 110 degrees F, then sprinkle the yeast over it, allowing it to dissolve for 5 minutes. When it has mostly dissolved, add it to a large bowl (preferably that of your stand-mixer, if you have one) and add in the milk and shortening mixture. Add in the eggs, sugar, salt, nutmeg (or cinnamon), and about half of the flour. Beat the ingredients together on low speed until just moistened, then add in the rest of the flour. Beat until just combined, then switch out your attachment for a dough hook, or knead by hand. Use the dough hook until the dough is smooth and pulls away from the side of the bowl, which should take about 3-4 minutes. Oil a very large bowl and place the dough inside. Cover well with plastic wrap, place in a warm spot, such as near your window, and allow to rise for 1 hour, or until it has doubled in size.

After the dough has risen, roll it out on a lightly floured surface, until it is about 1/2 inch thick. Use a doughnut cutter or a glass to cut out the donuts (and use a shot glass to cut out the holes of the doughnuts if you don’t have a doughnut cutter). Place the cut-out donuts on a lightly floured baking sheet, and cover with a dish towel. Place in a warm spot for another 30-45 minutes and let the dough rise again.

When your donuts have risen, heat your oil in a large, heavy bottomed pot, such as a Dutch oven. Heat the oil to 365 degrees F, then carefully place the donuts in the oil, cooking 3 or 4 at a time so that they aren’t overcrowded. Cook for 1 minute on each side, then transfer to a cooling rack to cool.  Roll them in sugar and serve.  Keep an eye on the temperature- I had to lower the heat to keep the donuts from burning. 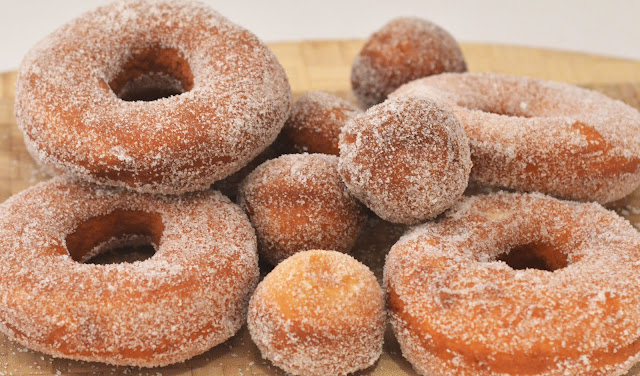