It is officially my two year blogiversary!  In honor of this momentous occasion, I not only gave my blog a new look, I also tried deep frying for the very first time!  I first discovered my love of cider donuts when I moved to Boston for college and learned about the yearly fall ritual of driving an hour outside of the city to pick apples and pose for pictures on ladders.  Despite growing up in a state known for apples, I had never actually picked one!  And I had definitely never enjoyed the sheer perfection that is a fresh cider donut rolled in cinnamon and sugar.  Apple picking seems to be kind of an east coast thing- one of the many reasons I am happy I tried out this side of the country for a while.

I had this vision of making donuts and sipping on hot apple cider and rum while wearing a cozy fall scarf.  Unfortunately, it was 80 degrees with about 100% humidity the night that I decided to heat a vat of hot oil in my stuffy little kitchen.  I suppose it is somewhat appropriate since the last time I actually went apple picking in college it was about 90 degrees and my hopes of wearing a cute fall scarf were similarly dashed. 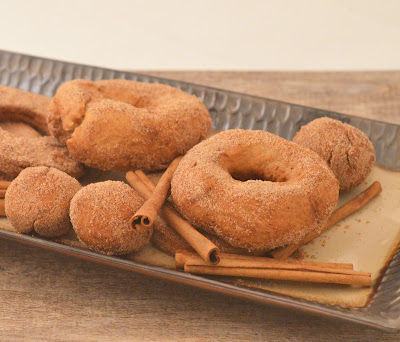 I am glad I went through the experience of making donuts, although I can’t say I was perfectly pleased with the result.  They had a consistency closer to a dense cake than the fluffy donuts I envisioned.  I will be making donuts again soon and using a different recipe with more yeast- so I will keep you all posted on my progress.  The best part of making this recipe is that I am no longer afraid of deep frying!  I am faced with such a wide array of high-cholesterol options right now!  What to make next?  Given my love of mozzarella sticks, there is a high likelihood that the next thing I decide to fry will probably have a melted cheese component.

Now if I can give in to my sentimental side for just a moment, I would like to thank all of you who have been loyal readers for 2 years!  I feel so lucky to have been able to share meals with most of you.  I would also like to thank all of the roommates I have had over these past two years for letting me make huge messes in the kitchen and for trying the flops as well as the successes. 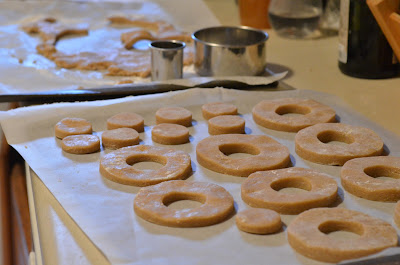 Bring the apple cider to a boil in a medium saucepan. Boil until it is reduced to 1⁄4 cup, 7 to 10 minutes. Pour into a glass measuring cup and let cool to room temperature. Combine the flour, yeast, cinnamon, and salt in a medium bowl and set aside.

Transfer the dough to a lightly oiled bowl or dough-rising container, cover the bowl with plastic wrap, and let stand at room temperature until it is puffy and slightly risen, about 1-1⁄2 hours.
Line 2 baking sheets with parchment or waxed paper and sprinkle generously with flour. Turn the dough out onto one of them and sprinkle the top of the dough with flour.
Flatten the dough with your hands until it is about 1⁄2 inch thick, sprinkling on more flour if necessary to prevent sticking. Place the baking sheet in the freezer until the dough is slightly hardened, about 20 minutes.

Add 3 inches of oil to a deep pot. Attach a candy thermometer to the side of the pot and heat the oil over medium heat until it reaches 350°F. Line a large platter or another baking sheet with several layers of paper towels.

Carefully add a few donuts to the pot, being careful not to crowd them. Fry until golden brown on one side, 30 seconds to 1 minute. Turn and continue to fry until golden on both sides, another 30 seconds to 1 minute. Drain the cooked donuts on the paper towels, and repeat with the remaining doughnuts, keeping an eye on the thermometer to make sure the oil stays at a steady 350°F and adjusting the heat as necessary.  Roll the warm donuts in cinnamon sugar and serve warm