Pappardelle with Corn, Pancetta, and Chives 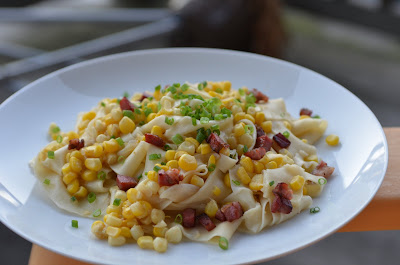 As many of you know, I love restaurants. This sounds obvious, because most people love restaurants. But my love is on an entirely different and sometimes neurotic level. I have a perfect example to illustrate my craziness. I’m going home to Seattle in a few weeks and bringing my boyfriend with me. He has never been to the west coast before, and he loves food almost as much as I do. We are going to spend most of the week at Lake Chelan, so we only have two precious dinners in Seattle. In order to take full advantage of this, we obviously had to do some research. After looking at about fifty restaurants and analyzing every aspect of their menus, we are still in the process of making some decisions. Most people think spending hours looking over menus sounds like a boring waste of time, but I take this approach to most of my dinners out and I think it is extremely rewarding for several reasons:

1. I make informed decisions. By looking at a million restaurants, I ensure that I (almost always) find a delicious meal. When you are a law student with an extremely limited purse, it is important to make every dinner count.

2. Looking at menus makes me excited! It prolongs the enjoyment of the dining experience. I actively look forward to the food that I am going to eat. Sometimes I even memorize a menu because I look at it so much.

3. Menus give me ideas. I often try to replicate meals that I eat in restaurants, but sometimes I see an item on a menu that I decide to make without even tasting it first! Which brings me to tonight’s post….

How to Cook a Wolf’s sample menu is the inspiration for this dish. I have had an insatiable craving for corn lately and the saltiness of the pancetta sounded like a good pairing. I made the pasta from scratch but this meal would be just as delicious (and much less time consuming) if you buy fresh pasta instead. It is a simple meal with few ingredients that has an amazing result.

In other corn news, I will be posting my all-time favorite corn on the cob recipe when I am blogging from Chelan in a few weeks (yes I have already planned a menu for each night that I am there). 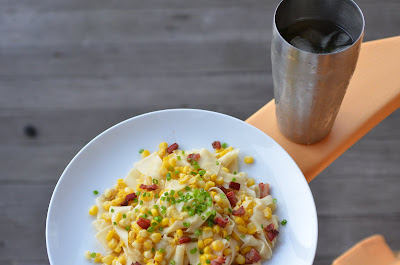 Cook the pancetta over medium heat until crispy. Using a slotted spoon, transfer to a paper towel lined plate and set aside. Cook the shallots over medium-high heat in the pancetta drippings. Add some butter if the skillet becomes dry. Once the shallots soften, add the corn and cook, stirring occasionally, until it begins to soften.
Meanwhile, bring water to boil in a large pot. Season generously with a good amount of salt; add pasta and cook, stirring occasionally until al dente. Transfer about 1 ½ cups of cooking water to the corn while the pasta cooks. Bring the corn to a boil and cook until the liquid has evaporated and thickened. Drain the pasta, reserving an additional cup of cooking water.
Transfer pasta to the skillet. Toss with tongs and cook until pasta is tender and coated with the pan sauce. Add the cheese and toss until melted. Sprinkle with chives and pancetta, season with salt and pepper, and enjoy!


As a bonus to this post, I am sharing my boyfriend's recipe for Mint Juleps.  I hate whiskey but even I have to admit that it wasn't horrible.  He insists the silver goblet is of the utmost importance because it keeps the drink frigid. 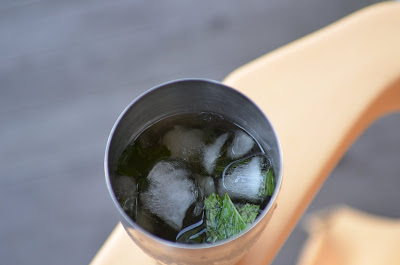 Muddle mint with simple syrup in the glass.  Add whiskey, and chill in freezer until cold.  Add crushed ice to fill glass half-way.  Top off with club soda and stir.  Garnish with a sprig of mint.
Posted by Emily at 6:53 PM