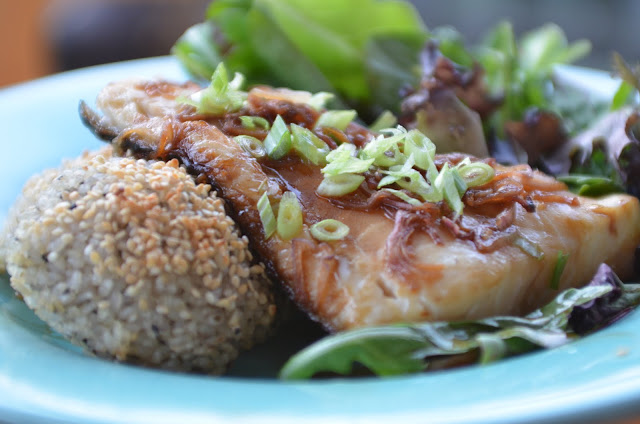 I am sitting in my kitchen as I write this, seriously questioning my sanity. It is close to 90 degrees right now in Boston, there is a heat advisory in effect for the next two days, my apartment does not have central air conditioning, and I decided to turn on my oven. Not to mention my kitchen window is perfectly positioned to allow the sun to slowly fry me while I stand over the stove. Despite the miserable heat, I think this meal was worth it.  And ultimately very enjoyable since I escaped to my air conditioned room when it was actually time to eat.

I got the idea/craving for this dinner from Sansei, our go-to sushi restaurant in Maui. They serve a huge salad with the catch of the day and a deliciously crispy rice cake. My attempt to recreate the dish was pretty successful- although my rice cake was not quite as crispy as Sansei’s. This could have something to do with the fact that my oven doesn’t actually have a broiler. I think that in a normal oven the broiler would brown the rice and make it crispier. The glaze was a perfect accompaniment to the fatty fish. Unfortunately the recipe is only an approximation as I didn’t measure anything. I recommend tasting along the way to make sure it doesn't get too salty.

Glazed Sea Bass with Nori Rice Cake
For the fish:
½ cup tamari soy sauce
2 tablespoons ponzu sauce
2 tablespoons white wine vinegar
2 tablespoons sugar
½ cup chicken stock or water
4 6-ounce sea bass fillets
1 shallot, thinly sliced
2 tablespoons green onions, thinly sliced
To make the glaze, combine first five ingredients in a saucepan over moderate heat. Simmer for about ten minutes, or until the glaze has reduced by half. Remove from heat and let cool.
Lay sea bass fillets in a parchment lined pan. Cover them with thinly sliced shallots and pour glaze over. Let marinate for about a half hour, basting the glaze periodically with a spoon. Broil six inches from heat for about 8 minutes. Remove from oven, sprinkle with green onions and serve with nori rice cake and mixed greens.

For the rice:
1 cup sushi rice
10 sheets of roasted nori, crushed (I used Annie Chung’s brand- delicious!!)
1 tablespoon toasted sesame oil
2 teaspoons kosher salt
2 tablespoons sesame seeds
Combine rice with 1 ½ cups water , nori, and sesame oil in a pot. Bring to a boil, then cover and simmer over low heat for about 20 minutes, or until the water is gone. Add salt and 1 teaspoon sesame seeds to taste, then allow rice to cool to room temperature.

Preheat broiler. Once rice has cooled, form small patties and place on a parchment lined baking sheet. Sprinkle with remaining sesame seeds. Broil for fifteen minutes, or until rice has become crispy and slightly browned.
Posted by Emily at 5:32 PM