I’ve been making quite a lot of recipes inspired by restaurants lately. I guess that will end next week when I leave Seattle and go back to my real life as a broke student. The restaurant reviews will become a lot more sporadic... Although I have gotten some groupons for Boston that I am excited to use (especially the Elephant Walk- I haven’t been there since college but I remember it was delicious). 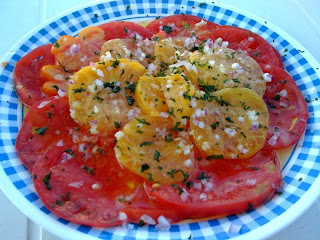 Anyways, while I still have good restaurant fodder I will tell you about Harvest Vine, a Basque restaurant in Madison Park (one of my favorite neighborhoods in Seattle). I highly recommend it both for the atmosphere and the food. The menu is small plates but it is obviously very different from the typical tapas fare since it is specifically from the Basque region- the menu had nothing fried and not as many potatoes dishes. My favorite was the lamb marinated in saffron honey and served with confit of cherry tomatoes. There were also some pretty delicious desserts. For one of our appetizers we got and Ensalada Lando- heirloom tomatoes with olive oil, sherry vinegar, and garlic. I ended up making a version of this for my mom and me after a long day of driving. We wanted to have a light dinner so we got heirloom tomatoes from the market and had the salad with some greens, fresh bread, and the cheeses that were left over from the baby shower. The tomatoes were really good and extremely simple and open to variations (cheese sprinkled over the top?). Obviously in a dish with such simple ingredients the quality of each is very important (ripe tomatoes, extra virgin olive oil, etc.). We only had a tiny bit of garlic so I minced some red onion to sprinkle over the tomatoes as well. Use the leftover olive oil on the plate to dip bread in.


Heirloom Tomatoes with Olive Oil and Garlic
Serves 2-3
Adapted from Harvest Vine- all of the measurements are approximate
3 heirloom tomatoes, thinly sliced
~2 tablespoons olive oil
~2 teaspoons sherry vinegar
1 clove garlic, pressed
1 tablespoon red onion, minced
2 teaspoons basil (or other herbs), minced
Arrange the tomatoes on a plate and drizzle with the olive oil and sherry. Sprinkle with garlic, onions, and basil.
Posted by Emily at 5:22 PM

Email ThisBlogThis!Share to TwitterShare to FacebookShare to Pinterest
Labels: Healthy, Side Dish