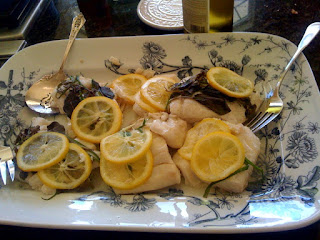 Last Sunday was my first semi-catering gig at a baby shower that my mom was co-hosting.  It went very well and it made me want to expand my catering experience.  If you cover the cost of food I am happy to cook for anyone!  I’m sharing the menu that I prepared along with a recipe for fish wrapped in parchment paper(en papillote in French).   I can't take credit for the adorable chalk board menu- that was the other host's idea.  My handwriting is definitely not that neat.  Some of the menu is in french so I'm providing a translation.  I will share the recipes for the appetizers that I served in a later post- they were good but not as applicable to daily cooking as the fish is so I wanted to share that first. 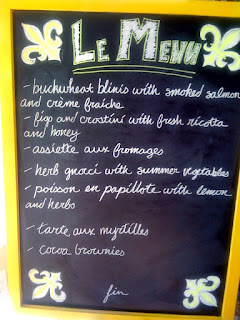 ~The Menu~
buckewheat blinis with smoked salmon and crème fraiche
crostini with figs, fresh ricotta, and honey
assorted cheeses
herb gnocchi with summer vegetables
halibut en papillote with herbs and lemon
blueberry tart
cocoa brownies
Wrapping fish in parchment lets it steam and the result is a perfectly cooked piece of fish that is extremely low-maintenance and is pretty healthy.  I used olive oil instead of butter but the end result was very rich and succulent.  This would be a perfect meal for a weeknight dinner- put the parchment packets in the oven and then prepare some quinoa and a salad while the fish cooks.  I used halibut but many other kinds of fish would work equally as well.  I think the key is to pick a wild fish that has never been frozen if possible.  I topped my filets with fresh herbs, lemon juice, olive oil, and kosher salt but the options are endless.  You could do lemongrass, ginger, and soy sauce for more asian flavors.  You can also add vegetables like tomatoes to steam alongside the fish.
Halibut en Papillote
makes 4-6 servings
1 ½ lbs of any kind of fish, cut into 4-6 equal sized filets
tablespoons olive oil (roughly)
teaspoons kosher salt
2 lemons, 1 cut into thin slices
A few sprigs of fresh herbs
Parchment paper
Scissors
Preheat the oven to 400 degrees.  Rinse the fish and pat it dry.
Prepare the parchment packets- one for each filet.  Fold a long piece of parchment paper in half and then cut a half-oval on one side. 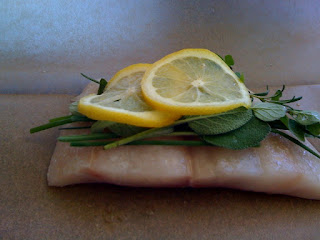 Place the filets near the fold of the parchment.  Sprinkle with plenty of kosher salt, top with herbs, lemon slices, a squeeze of lemon juice, and a generous drizzle of olive oil.  To fold up the packet, fold the paper over the fish, start rolling the paper at one corner and continue around.  The goal is to let as little steam escape as possible so roll them pretty tight. 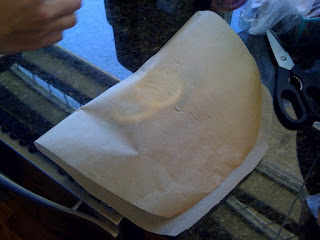 Place the packets on a baking sheet and bake for about 15-20 minutes depending on the size of your filets. 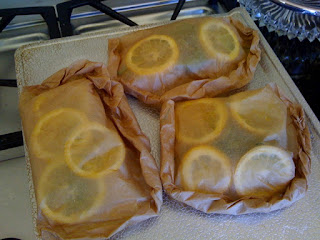