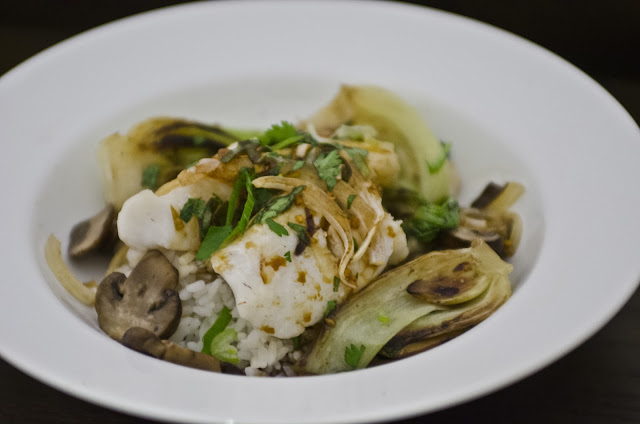 I wasn’t planning on blogging again so soon (it being finals and all)- but my current procrastination is a testament to how amazing this is.  You should probably make it for dinner right now.  The recipe is from the latest Bon Appétit, but I’ve made a few minor changes: I added mushrooms and onions and I omitted the sake (didn’t want to make an extra stop at the liquor store- stupid Massachusetts laws).  But I think the sake would be very delicious- will try next time.

This is actually an ideal dinner for finals because it is very quick!  Minimal prep, and then the fish cooks very quickly.  The sauce forms a sort of vinaigrette.  I’m thinking it would probably also be yummy spooned over grilled fish.

Arrange a rack in upper third of oven; preheat to 400 degrees.  Combine scallions, cilantro and next 4 ingredients in a small bowl.  Whisk in 1 ½ tablespoon oil.  Set aside.

Heat remaining oil in an oven-proof skillet until shimmering.  Throw in mushrooms and cook for roughly one minute, until browned.  Move mushrooms to side of pan, then add bok choy, cut side down, and sear until golden brown, 2-4 minutes.  Turn bok choy cut side up and remove pan from heat.  Add sake (or mirin).  Arrange the fish over the bok choy and sprinkle with yellow onion.  Roast in oven until fish is just cooked through, 10-12 minutes.

Serve fish with bok choy and mushrooms over the rice.  Spoon some cilantro-lime sauce over the fish, serve with additional sauce for drizzling. 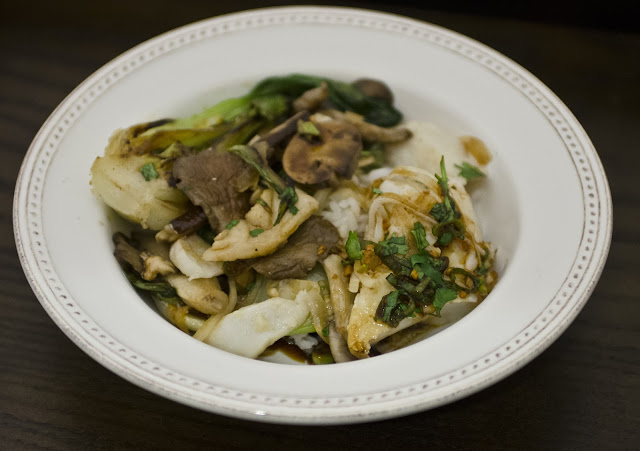