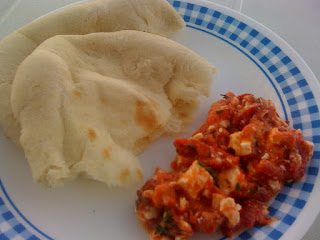 First of all, I would like to point out the new google search feature of my blog- it makes it a lot easier to find older recipes.  I am working on trying to figure out how to set up an index of the recipes as well...Also, if you want to subscribe to email alerts about new postings, follow the link to the google group and join.  Becoming a follower of the blog doesn't automatically give you alerts.  Thank you to everyone who has been sharing the blog with their friends and family- it is very exciting to hear from so many people who have tried some of the recipes.
So last night  I had a delicious meal at Tilth in Seattle and I loved their menu.  I especially appreciate the fact that they offer half portions of all their dishes to make it easier to try more items.  Small plates are almost always my favorite type of meal to have at restaurants because then I don't have to make as many hard decisions about my meal.  Last night I actually ended up doing the vegetarian tasting menu which I highly recommend.  My favorite item was their housemade pappardelle with fava beans, cipollini, and a sous vide egg.  I'm going to try to make some version of this very soon....
Anyways, back to small plates.  In DC,  Zaytinia, José Andrés’ restaurant in Chinatown, has a delicious selection of Mediterranean inspired small plates.   I love going there with groups because although the items can get kind of pricey, they bring you unlimited pita bread so you never leave hungry, even if you don’t order the recommended four plates per person (which I think is a little overboard anyway).  The pita bread is amazing- especially when it first comes out of the oven.  It barely even resembles the cardboard-like equivalents that are sold in grocery stores.  Since Zaytinia’s pita bread ruined me for the store-bought alternatives, I decided to try to make my own.  I also made my favorite dip from Zaytini- htipiti (don’t ask me how to pronounce it) which is a simple blend of roasted red peppers, feta, and thyme.
Out of all the breads I have made this summer, I think that pita was the easiest.  It rises in an hour and a half and then it only takes 5 minutes to cook!  A pocket magically appears in each piece of bread and I swear the flavor was just as good as the ones from Zaytinia.  I actually had three people try the pita bread who have also been to Zaytinia and they agreed with me.  The bread was also pretty sturdy and I think the pocket would definitely hold up to being filled with sandwich or salad contents.  I want to try making wheat pitas next and I might make some kind of cucumber salad to stuff them with.   The pitas would also be a great accompaniment to grilled meats (like lamb kebabs) and yogurt sauce.
Pita Bread
Recipe from The Fresh Loaf
makes 8 pitas
3 cups flour
1 ½ teaspoons salt
1 tablespoon sugar
2 teaspoons yeast
1 ¼ cup water, at room temperature
2 tablespoons olive oil or vegetable oil, at room temperature
In a large bowl, combine all of the ingredients using a wooden spoon until the mixture forms a ball.  If it seems too dry, you may need to add a little water.
If you have a stand mixer, use the dough hook attachment and knead the dough at low speed for about 10 minutes.  If you do not have a mixer, knead it by hand (you may need to put some flour down since the dough is pretty sticky).  After kneading, place the ball in a lightly oiled bowl.  Cover it with plastic wrap and let rise until it doubles in size (1 ½ - 2 hours).
When the dough has doubled in size, punch the dough to release some of the gasses, then divide the dough into eight pieces.  Roll each piece into a ball, then cover the balls with a damp paper towel for 20 minutes to let the dough rest.  This makes it easier to roll it out.
While the dough is resting, preheat the oven to 475 degrees and place a baking sheet in the oven (if you have a baking stone, this would work even better).  Using your hands or a rolling pin ( I just used my hands), flatten each ball of dough to about ¼ inch thickness.  The dough will not spread out at all in the oven but it will puff up and get thicker.  Cook the pitas on the hot surface of the baking sheet or stone for 3-5 minutes.  Mine took 5 minutes exactly.  If you want them a little crispier, leave them in longer.  Let them cool for a few minutes before you start eating them but don’t wait too long because they are best warm. 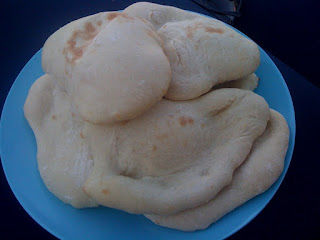 Htipiti
Inspired by Zaytinia
½ cup of roasted red peppers from a jar, roughly chopped
¼ cup feta, cubed or crumbled
1 ½ teaspoons thyme
~1 teaspoon olive oil
Combine all ingredients in a food processor and pulse until they are combined but not so much that it becomes a purée.  Its best to still have pieces of red peppers.  I don’t usually measure the olive oil so just kind of eyeball it.  The flavors together are delicious no matter what so proportions aren’t very crucial.
Posted by Emily at 1:57 PM