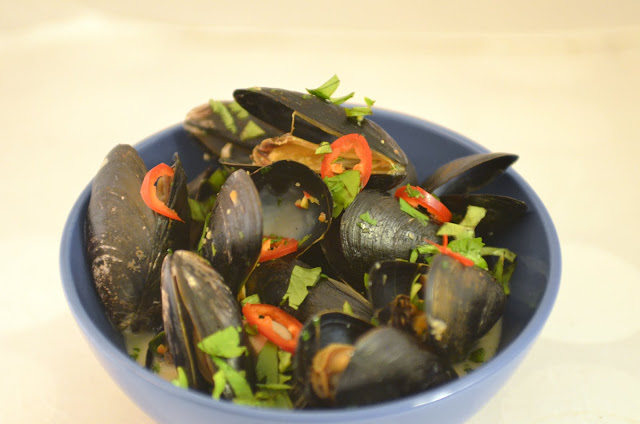 This recipe has been on my to-make list for months. I LOVE mussels and thought this would be a nice counterpart to the recipe I blogged about last year. There are quite a few mussels recipes on Tastespotting that use coconut milk but many of them also use curry paste. I am a big fan of curry but unfortunately I haven’t been impressed with the grocery store pastes that I have tried.  I was also worried that the curry flavor would overpower the mussels. Tyler Florence’s recipe caught my eye because it uses a bunch of fresh ingredients to add spice and flavor instead. I was also intrigued by the addition of lager to the cooking liquid. The broth was delicious and kind of reminded me of Tom Ka soup. The only changes I made from the original recipe were to add mushrooms and shallots. Next time I will also add more hot peppers because it wasn’t spicy enough- but you can adjust according to your spice preferences.


We had a ton of leftover broth so I added zucchini, onions, and more mushrooms the next night and served it over rice! 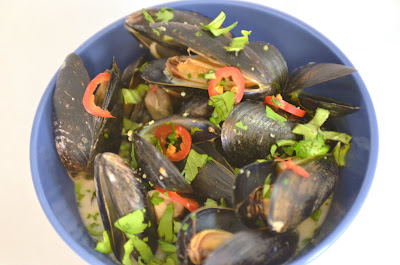 In a food processor, combine the garlic, chiles, ginger, cilantro, lime zest and olive oil and process to a paste; transfer to a large bowl. Whisk in the coconut milk and lime juice and season with salt.
In a large soup pot, sauté mushrooms and shallots in 1 tablespoon of olive oil until they begin to soften. Add the lager and bring to a boil over high heat. Boil until reduced to 1/2 cup, about 7 minutes. Add the mussels, cover and cook, shaking the pot a few times, until the mussels just begin to open, about 4 minutes.
Uncover the mussels and stir in the coconut milk mixture. Cover and cook, shaking the pot a few times, until all of the mussels open, about 8 minutes. Spoon the mussels and broth into bowls and serve.