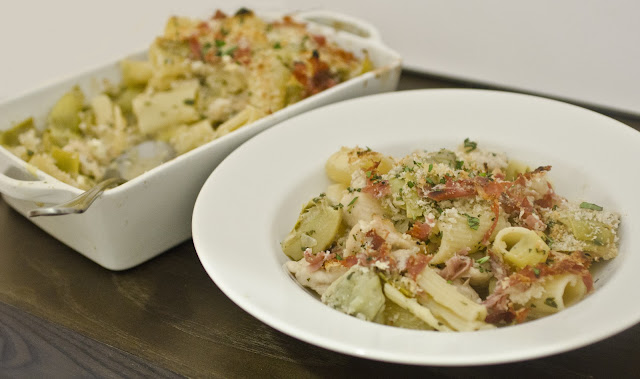 Exciting news!  Navy Blue Kitchen is hosting its very first theme month!  For the whole month of February, I will be showcasing recipes that you can use to stock your freezer.  I have cleverly decided to call it “Frozen February.”  The plan is to make extra food so that you can enjoy a delicious dinner, and then freeze the rest for later!  If you have any amazing freezer recipes- let me know!

Before we get started, a few tips on freezing:

1. Get a good storage system!  Plastic is fine for short term freezing but over time it can leech.  I just invested in this set that seals out air and can also go straight into the oven or microwave!

2. Get out as much air as possible to avoid freezer burn.  Freezer burn doesn’t make the food unsafe but it damages flavor and texture.

3. Let food cool completely before freezing.  Warm food will raise the temperature of other foods around it and result in uneven freezing.

4. Put dates on your food.  Even though you can theoretically freeze food indefinitely without it going bad, flavor suffers over time.  As a general rule I try to use food between 1-2 months after freezing.  For more specifics, you can consult this chart.

5. Only thaw foods in the microwave, fridge, or cold water.  Leaving them out on the counter to thaw encourages bacteria growth.  My favorite method is in the fridge- but this takes some forethought.  Smaller items can defrost overnight but larger items can take up to two days or more.


For my first frozen meal, I decided to do some sort of baked pasta but I didn’t want to use a red sauce because I’m making papardelle and meatballs later this week (don't worry I will blog about it!).  But when I went to Tastespotting and Food & Wine (my normal sources for recipe inspiration), I was confronted with a litany of red sauce baked pasta options!  The only recipes I found that diverged from this formula used unhealthy cream sauces.  So I ventured out on my own to come up with this one and it was delicious! 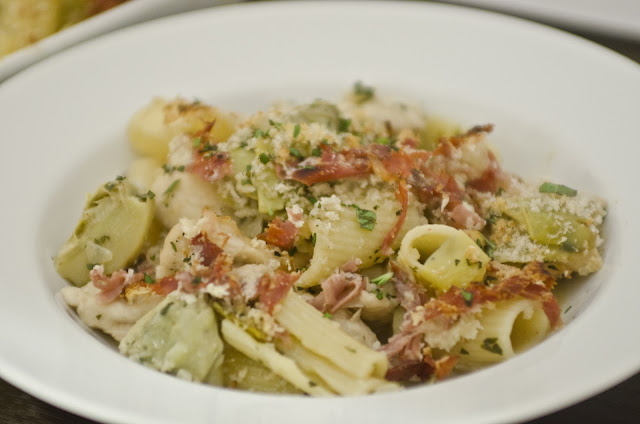 Preheat the oven to 400.  Cook the pasta in a large pot of salted boiling water until al dente.  Strain and set aside.

Meanwhile, put the chicken in a plastic bag along with the flour and toss to coat.  In a large skillet, heat the canola oil until it is shimmering.  Using tongs, shake the excess flour from the chicken and then place in the pan.  Depending on the size of your pan you may need to do two batches- you want the chicken to be in a single layer so that it browns nicely.  Cook for about three minutes, then flip and leave over high heat until the chicken is cooked through.  Remove to a plate.

Add about another teaspoon of oil to the pan and return to medium heat.  Add the onions and garlic, stirring until they soften up.  Return heat to high and then pour in the white wine, using your spoon to scrape up all of the browned bits from the chicken.  Bring the wine to a boil and then reduce to a simmer for about five minutes.  Add the chicken stock along with the artichoke hearts and cook for an additional 3 minutes.  Taste the sauce and adjust seasoning if necessary.

Add the pasta to the pan along with the chicken, ½ cup of cheese, and ¼ cup oregano.
Divide the pasta into two pans (one to cook now and one for the freezer).  Top with the panko, prosciutto, and the remaining oregano and cheese.  Put one pan in the oven for ten minutes, or until the cheese starts the melt.  Then put it under the broiler for about two minutes or until the panko is browned and the prosciutto is crispy.

Let the other pan cool completely, then place in the freezer.  When you want to eat it, thaw it in the fridge overnight.  Preheat the oven to 400, and cover the pan with foil and place in oven for about 40 minutes, or until the sauce is bubbling.  Then put it under the broiler to brown.