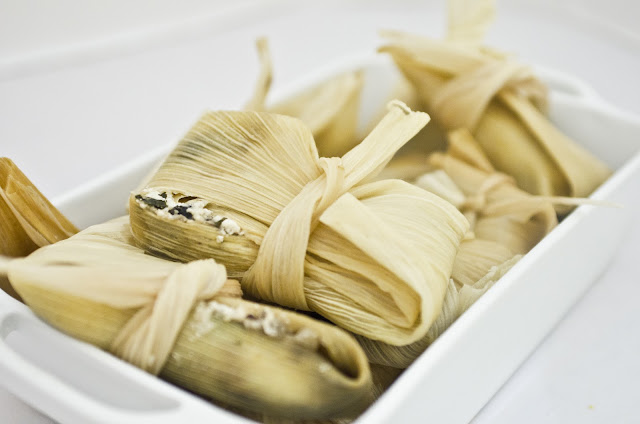 Never in my life did I think that I would ever possess a 4 lb bucket of lard.  But as I researched tamale recipes, Addison somehow convinced me that they wouldn’t be authentic if we substituted butter instead.  When I asked the man at the Mexican grocery store if I could purchase a smaller quantity than FOUR POUNDS, he laughed and said no- just one size.   Addison has assured me that we will use the lard for all kinds of things… so I hope you are all excited to read a year’s worth of recipes featuring lard!

I knew nothing about lard, so I did some  Wikipedia research. Did you know that lard actually has less saturated fat than butter?  But don’t get too excited- vegetables oils have way less.  It does have a higher smoking point than many fats though which makes it ideal for frying up chicken.  Wikipedia also says it makes for very moist pie crusts.  So I have some options.

Anyways, I’m sure you are all fascinated by this discussion of rendered animal fat, but the post today is about tamales!  Last month (while procrastinating during finals), I joined a group called the Daring Cooks.  Each month features a different challenge, and all of the members post their own interpretations on the 15th.  The idea is to force me out of my culinary comfort zone (i.e. pancakes and pasta) and tamales are definitely outside of that zone! The assembly seemed a bit daunting at first, but I followed the very clear picture steps on this blog and everything turned out fine (although it looked like a hurricane had gone through my kitchen when I was done).  If you aren’t interested in leaving your culinary comfort zone, the mushrooms would also be a delicious filling for tacos or quesadillas!  Or you could just eat them on their own.  They were seriously yummy. 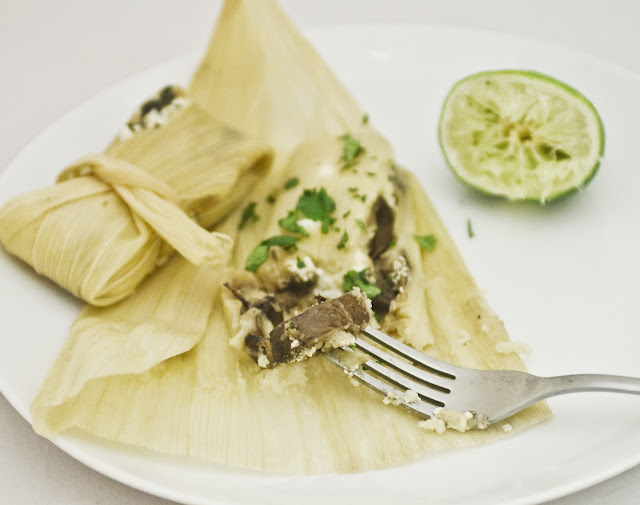 Before you start anything, put the corn husks in a large pot of hot water and soak for at least 1 hour (preferably 2).  Make sure they are completely submerged.

To make the filling, heat the canola oil over high heat in a large sauté pan.  When it is shimmering and very hot, add the mushrooms and sprinkle with a little salt.  Stir a few times, but allow the mushrooms to brown a little bit.  When they begin to release liquid and look slightly glossy, add the garlic and stir for a minute.  Add the chicken stock and sherry and bring to a boil.  Let boil until the liquid has almost completely reduced- this will add concentrated flavor.  Remove from heat, season to taste with salt and lime juice.  Stir in cilantro and set aside.

Whip the lard using an electric beater until it has almost tripled in size, about ten minutes.  Add the masa to a large bowl and mix in the baking powder, salt, and chili powder.  Slowly add the warm chicken stock, mixing with a large spoon, until the liquid is absorbed.  Add the whipped lard and continue to mix until smooth.  Instead of writing out directions for assembling the tamales, I’m going to refer you to one of the very helpful videos on youtube.  Just put some mushrooms in the middle of each tamale along with a small dollop of goat cheese.
Once they are assembled, steam them in a large pot for about 45 minutes.  Enjoy!