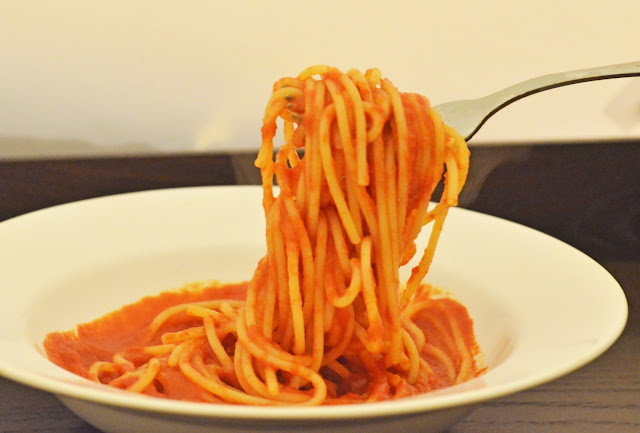 I realize the timing of this post might not be perfect, since most of you are probably trying to avoid making a mess in your kitchens right now in preparation for the big day.  But I am subject to the whims of my busy law school schedule, and this happens to be the first time I haven’t been busy doing work in the past week!  Technically I should be working ahead for Monday right now, but almost all of my friends have left for break already, I’m sitting alone at a table in the library waiting for my 1:30 class to roll around, and I just can’t bring myself to crack open Administrative Law.  Blogging seemed like the perfect distraction.  Plus, this spaghetti would be a great post-Thanksgiving meal because it is fast and doesn’t make a big mess.  You have no reason to use a pre-made spaghetti sauce anymore because this is almost as easy and ten times more delicious thanks to the butter that gets stirred in at the end.

My flight to Seattle doesn’t leave until 6pm but I will probably head to the airport pretty quickly after my class ends at 2:45.  I’ve been on the east coast for so many years now that going to the airport is very closely tied to all of my holiday celebrations, so hanging out at Logan makes me excited!  Apparently my sister decided to work from home today so she was able to catch a flight to Seattle early this morning instead of waiting until tonight as planned.  Last year, she told me she couldn’t take enough time off work to come to Boston with my parents but then she surprised me by flying to Boston on Thanksgiving morning!  I was completely flabbergasted when she walked in the door (imagine many loud expletives), thanks to the elaborate web of lies she wove leading up to it.  The pinnacle of her deception was a picture she texted me of our house in Seattle.  My mom had taken the picture days before and sent it to Erin to trick me into thinking she had gone there when really she was en route to Boston.  So when I got a picture text of Erin and my parents this morning, my initial instinct was to not believe them.  It’s true they don’t really have any reason to lie this year, since we are all going to be together and there is no room for surprise.  But I didn’t really trust them until I received a confirmation picture of Erin holding today’s Seattle Times at our kitchen table.  Although my dad did point out that they could have photo-shopped that as well…

I hope everyone has a wonderful Thanksgiving full of delicious food!  I will be spending all day tomorrow cooking, playing scrabble, and drinking soy lattes from Rococo. 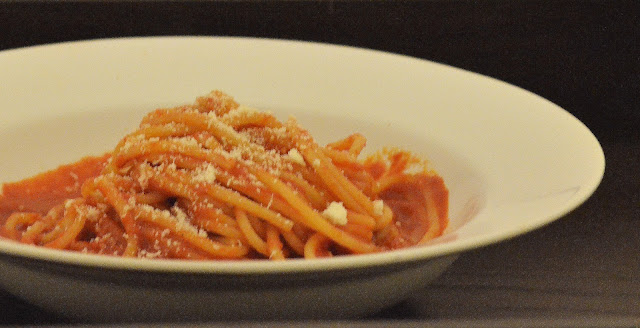 Add the olive oil to a large pan and heat over medium heat.  Add the garlic and red pepper flakes and sauté for several minutes, reducing heat as necessary to avoid burning the garlic.  Add the tomatoes and bring to a boil.  Reduce and allow the sauce to simmer for about 25 minutes.  Either cover the pot with a lid or make a shield out of foil, or you will end up with tomato splatters all over your kitchen.

Meanwhile, bring a pot of water to boil, season generously with salt and cook the spaghetti until it has just barely softens- not quite al dente.  Drain it and reserve about a cup of cooking water.  Add the spaghetti to the sauce and cook over high heat until the liquid is absorbed and the pasta is just al dente, stirring occasionally.  If the sauce becomes too thick, add a little bit of the cooking water to thin it out.  Remove from heat, season with salt and pepper, and add butter, basil, and cheese.