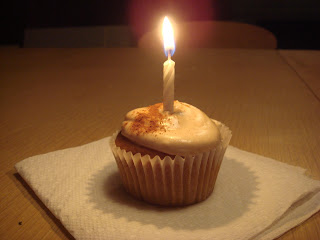 It is officially my blog’s one year anniversary!  To celebrate this joyous day, I made pumpkin cupcakes with cinnamon cream cheese frosting.  As I have mentioned many times before, I am really not a baker at heart.  But in the fall I become a temporary baker in order to feed my addiction to pumpkin.  I found this recipe last year and passed it along to my mom who got rave reviews after she made them for her book club (which is actually closer to a food club).  My aunt used the recipe to make a layer cake for my cousin’s birthday last year and it was delicious in that form too.  Browning the butter that goes into the batter adds a nutty depth of flavor and the cinnamon cream cheese frosting is actually as good as it sounds.  One of my roomies said that these are better than the pumpkin chocolate chip cookies.  So you should probably make them right now.  And thank you to my loyal followers who have been with me for a whole year now! 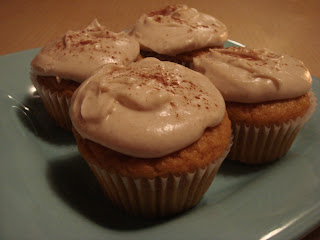 Preheat oven to 325 degrees Fahrenheit. Line muffin tins with paper liners. In a saucepan, melt the butter over medium-low heat and continue to cook, swirling occasionally, until butter turns golden brown, Skim foam from top, and remove from heat. Pour into a bowl to stop the cooking, leaving any burned sediment behind; let cool.

Whisk together flour, baking powder, salt, cinnamon, nutmeg, and cloves. In another bowl, whisk together the pumpkin puree, both sugars, eggs, and brown-butter mixture. Add the flour mixture, and whisk until just combined.

Beat butter and cream cheese with a mixer on medium-high speed until fluffy, 2 to 3 minutes. Reduce speed to low. Add sugar, 1 cup at a time, and then cinnamon and vanilla; mix until smooth.
Posted by Emily at 7:49 PM