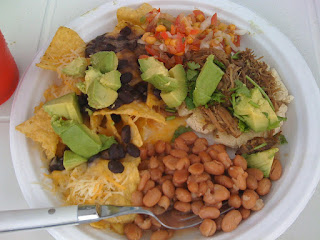 This recipe is perfect for a crowd- it is very easy to make in large quantities ahead of time and it smells delicious all day.  This is by no means a healthy recipe (which is blatantly obvious as you cut the fatty chunks of pork).  But sometimes dinners don’t have to be healthy.  Especially in the summer.  We used the carnitas to top nachos and I also made some sopas (thick tortillas) that I used as a base.  There are quite a few variations for carnitas out there so feel free to experiment.  The original recipe that I referenced actually uses water as the braising liquid but I have found that using beef stock helps the meat become caramelized and boosts flavor.  Also, the longer it braises the better, so start it early in the morning.
It is also obviously important to get a really good piece of pork.  We got ours from Bill the Butcher in Redmond, WA.  He supports local, sustainable, humane farming and all of his vendors raise animals without steroids, hormones, or genetically modified feed.  I haven't been able to bring myself to read Eating Animals yet but I have heard grotesque stories about the treatment of pigs in big slaughterhouses.  At least the pigs from Bill the Butcher are happy up until the end of their lives.  And on that note, enjoy the carnitas!
Carnitas
Adapted from David Lebovitz
makes 8 servings
4-5-pounds boneless pork should, cut into 5-inch chunks, trimmed of excess fat
1 tablespoon coarse sea salt
2 tablespoons canola or neutral vegetable oil
kitchen basics beef stock (my favorite brand of stock)
1 cinnamon stick
1 teaspoon chile powder
1 teaspoon ancho chile powder
2 bay leaves
¼ teaspoon ground cumin
3 cloves of garlic, peeled and thinly-sliced


Rub the pieces of pork shoulder all over with salt. Refrigerate for 1- to 3-days. (You can skip this step if you want. Just be sure to salt the pork before searing the meat in the next step.)
Heat the oil in a roasting pan set on the stovetop. Cook the pieces of pork shoulder in a single layer until very well-browned, turning them as little as possible so they get nice and dark before flipping them around. If your cooking vessel is too small to cook them in a single-layer, cook them in two batches.

Once all the pork is browned, remove from the pot and blot away any excess fat with a paper towel, then pour in about a cup of stock, scraping the bottom of the pan with a flat-edged utensil to release all the tasty brown bits.
Heat the oven to 350F degrees.
Add the pork back to the pan and add enough stock so the pork pieces are 2/3rd's submerged in liquid. Add the cinnamon stick and stir in the chile powders, bay leaves, cumin and garlic.

Braise in the oven with the lid on for 3½ hours, turning the pork a few times during cooking, until much of the liquid is evaporated and the pork is falling apart. Remove the pan from the oven and lift the pork pieces out of the liquid and set them on a platter.

Once the pork pieces are cool enough to handle, shred them into bite-sized pieces, about 2-inches , discarding any obvious big chunks of fat if you wish. I used a fork to do this since they stayed hot for a while. 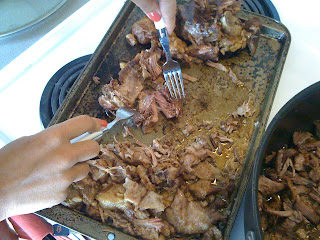 Return the pork pieces back to the roasting pan and cook in the oven, turning occasionally, until the liquid has evaporated and the pork is crispy and caramelized. It will depend on how much liquid the pork gave off, and how golden and crackly you want them. 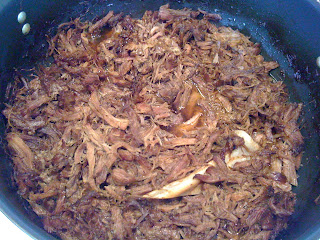 Sopes
2 cups masa harina (finely ground corn flour- you can find it in the Mexican foods section of the grocery store)
4 tablespoons all purpose flour
½ teaspoon baking powder
½ teaspoon salt
1 ½ cups warm water
Canola oil- for the pan
Toppings: avocado, onions, cilantro, tomatoes, pinto or black beans
Mix the dry ingredients together then slowly add the warm water, stirring until combined.  Use your hands to knead the dough until it becomes a ball.
Form the sopes by rolling the dough into a small ball and flattening it between a folded piece of plastic wrap.  Keep covered with a damp paper towel while you form all of them.  Heat a griddle or skillet (ideally cast iron) over medium heat, and coat with oil.  Cook the sopes on the griddle until they are lightly browned on each side.  Top with beans, carnitas, avocado, onions, cilantro, and tomatoes.
Posted by Emily at 5:23 AM