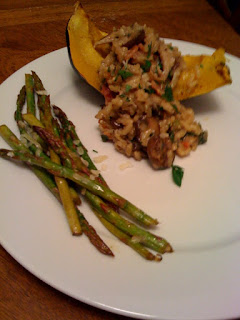 When I told Nora that I was planning on making mushroom risotto for dinner the other night, she basically told me that I was being boring. I scrambled to think how I could make it more interesting and complex and came up with the following recipe. It was delicious and I don't think that I will ever be able to make risotto without putting bacon in it now...the pictures (taken on my phone) do not do it justice but it was really pretty! I think it would make a good vegetarian Thanksgiving entree (obviously sans bacon). Nora made asparagus and a salad to go with it and we made a very unhealthy apple crisp for dessert. 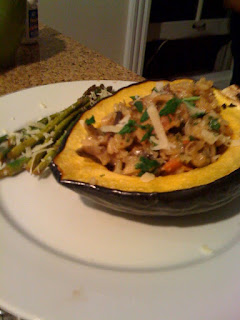 
Preheat the oven to 375 degrees. Cut the acorn squash in half and scoop out the seeds. Rub the inside with a little bit of olive oil and season with salt and pepper. Roast the squash on a baking sheet for about an hour or until the flesh is soft and the top is starting to brown and caramelize.

Cook the bacon over medium heat in a large skillet or dutch oven until the bacon is crisp and the fat is rendered. Remove the bacon with a slotted spoon and reserve on a paper towel. Pour the stock in a pot and bring to a simmer. Add the shallots to the bacon fat in the pan. Stir a few times and add mushrooms, thyme, and bay leaf. Cook until mushrooms have released their liquid, then add about 1/4 cup of wine. Turn the heat up to high and let the wine evaporate. Remove the bay leaf. Add the rice and stir for about thirty seconds or until the centers of the grains become opaque. Add the rest of the wine and turn down the heat to medium.

Add the chicken stock about a cup at a time and stir frequently. Let the stock absorb almost completely before adding more. Continue to stir and add until the risotto is cooked but not too soft. Remove from heat and add the bacon, parmesan, and parsley. Use the acorn squash as a bowl and serve!
Posted by Emily at 3:32 PM

Email ThisBlogThis!Share to TwitterShare to FacebookShare to Pinterest
Labels: Dinner